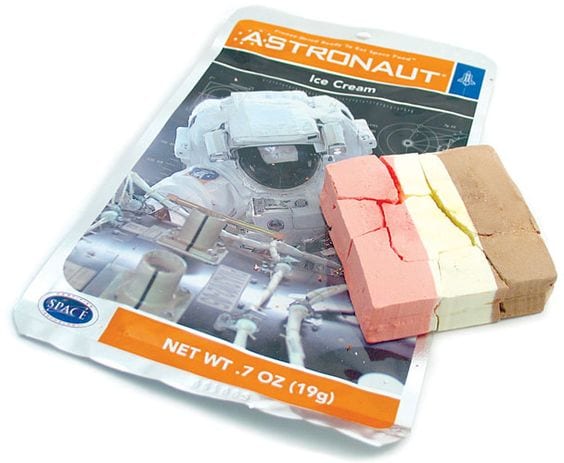 What do astronauts eat in space?

My May’s Moon books have involved a lot of research into the lives of astronauts. I’ve been fascinated by what it takes to become one and by the amazing experiments astronauts carry out in space for our benefit on earth. 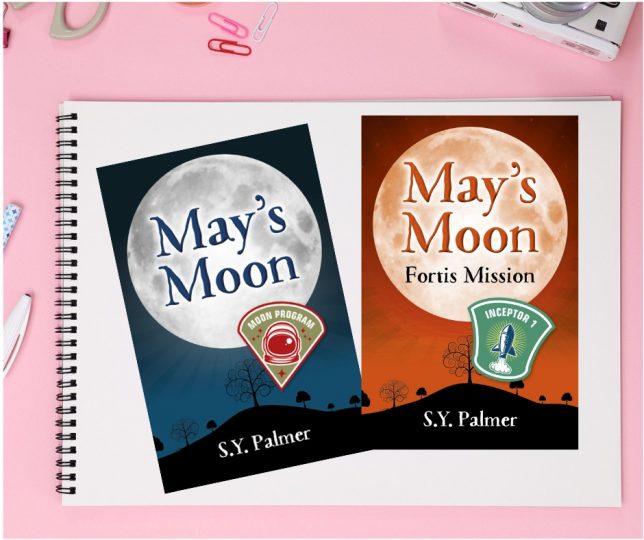 To make my fictional characters realistic and believable, I wanted to find out how astronauts actually live in space and one of the questions I’m frequently asked by children at school and festival events (apart from how astronauts go to the toilet) is what astronauts eat.

Part of this question stems from the space table I set up for events which, along with Lego figures, rockets, books, my light-up moon and a replica of a NASA astronaut, includes a packet of ‘Astronaut Ice-cream’. 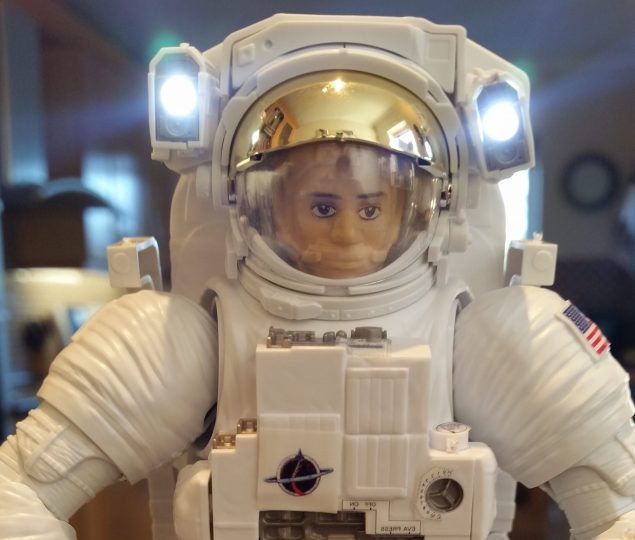 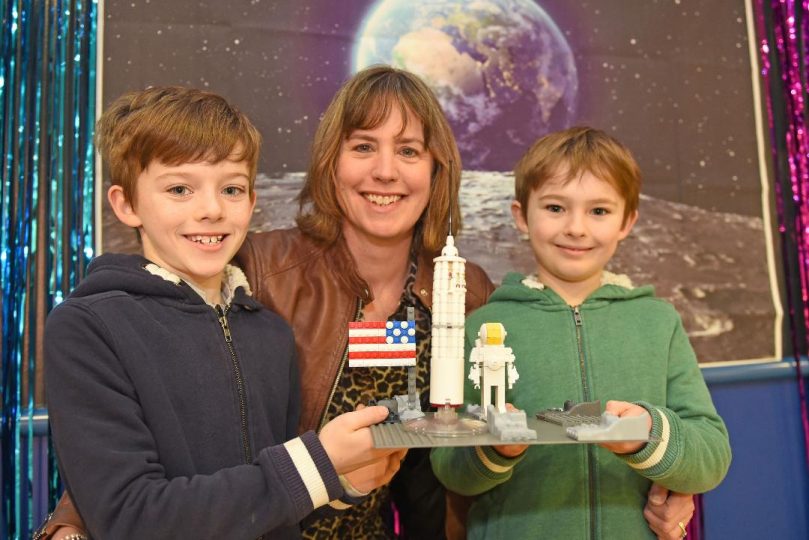 The only thing is, although it’s sold as astronaut food, it’s far from it. No astronaut has ever eaten it in space.

Rumour has it that it was developed prior to the 1968 Apollo 7 mission as a real contender for astronaut food but never made it. Perhaps it was the chalky, crumbly texture that was so unsuited to a microgravity environment. Perhaps the insipid flavour didn’t pass the taste test.

Whatever the answer, the only ice cream astronauts eat is the same as you’d get from your local supermarket.

Unfortunately, the freezer that arrived on the ISS in 2006 was earmarked for science experiments, so any ice cream that arrives has to be eaten immediately. So, apart from normal ice cream, what do astronauts eat in space?

The History of Space Food

From before John Glenn’s first orbit of the earth in 1962 to the most recent Mission 61 to the International Space Station in October 2019, scientists and nutritionists have worked to create astronaut food that tastes good, is high in essential nutrients and that travels well.

Mindful of weight limits and limited storage on space flights, their objectives also had to take into account how digestible the food would be and how pressure and vibrations might affect it.

Russian cosmonaut, Yuri Gagarin, was the first human to travel into outer space on April 12th, 1961. He ate his food from tubes, squeezing it out just like you’d squeeze out toothpaste.

His meal consisted of a tube of beef and liver paste, followed by chocolate sauce for dessert.

In John Glenn’s 1962 Mercury Programme orbit of the earth, his meal included a tube of apple sauce, a mixture of pureed beef and vegetables and a drink of water with some xylose sugar tablets. He chose not to eat the tube of spaghetti that he’d also taken with him. 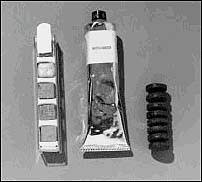 NASA also gave astronauts crushed cornflakes with crushed wheat, moulded into bite-sized cubes and coated in gelatine so they didn’t crumble. They then tried vacuum packed freeze-dried food, which retained its nutritional value, required no refrigeration and was incredibly light and compact.

However, rehydrating the food packages was a cumbersome process in microgravity. Water had to be injected through a nozzle and the pack kneaded to reconstitute the food.

By the mid-1960s space missions had increased in length and by the time of the first moon landing on the 20th July 1969, food rations had improved greatly. ‘Wetpacks’ were introduced, which gave astronauts food that was already hydrated and more like food at home and, among the foods that were eaten on the surface of the moon in the lunar module, was beef stew, bacon squares, date fruit cake and a pineapple grapefruit drink.

From 1973 and the launch of NASA’s Skylab, astronauts started to eat foods that had familiar tastes and textures. A fridge, a dining area and a food warmer gave astronauts a more normal eating experience – vital for their psychological wellbeing.

About six months before launch, astronauts spend time tasting and rating a menu of around 200 food items. The result is a personalised menu, designed to meet each individual astronaut’s daily nutritional and calorific intake needs.

They can also request favourite snacks or condiments off the standard menu as long as they comply with microbiological and shelf-life requirements.

Nowadays, on the ISS, the US provides about half of the food, and other countries, primarily Russia, provide the rest. Astronauts don’t have to bring their entire six-month food supply with them on arrival to the ISS as resupply vehicles visit every few months.

The only refrigerator on board the ISS is used to store biological experiments so all food has to be shelf stable for a minimum of 18 months, although a small chiller has been brought up so astronauts can enjoy cold drinks.

Although the choice of food on the ISS is now extensive, it can taste very different in this environment. The lack of gravity causes something called, ‘fluid shift’, which leaves astronauts’ heads feeling congested. This affects their sense of smell and taste.

Smells also move differently in space. They don’t rise and disperse as they would here on the earth and therefore astronauts find it difficult to smell their food.

For these reasons, most astronauts tend to have a preference for spicier food.

What can’t astronauts eat or drink on the ISS?

Some of the food you won’t see on the ISS might surprise you.

Bread has long been avoided as it often lacks the structure and shelf life needed to work as space food. Instead, astronauts often use tortillas. Crumbly items like bread can also be life threatening in space.

During the 1965 Gemini 3 mission, an astronaut smuggled a corned-beef sandwich aboard in his spacesuit. Crumbs broke flew everywhere in microgravity, threatening to float into the astronauts’ eyes or into electrical panels, where they could have caused real problems.

Buzz Aldrin first consumed alcohol in space, when he drank wine as part of his communion ceremony on the lunar surface in 1969.

From 1986 to 2001, Russian cosmonauts on board the Mir space station were also treated to small amounts of brandy and vodka.

However, on board the ISS alcohol is banned, not just because it would affect an astronaut’s ability to do their job, but also because alcohol and other volatile compounds would have a negative impact on the space station’s water recovery system.

Even products that may contain alcohol, like mouthwash, perfumes and aftershave, are banned.

Salt and pepper in their usual granular format, along with other traditional spices and seasonings, would cause a major problem in microgravity. Instead, astronauts use these in liquid form.

Fizzy drinks don’t make it to the ISS either. The carbonation in these drinks acts differently in space than on the earth. Carbon dioxide bubbles remain within the liquid as opposed to being released as a gas, which can cause astronauts digestive discomfort.

Space Food of the Future 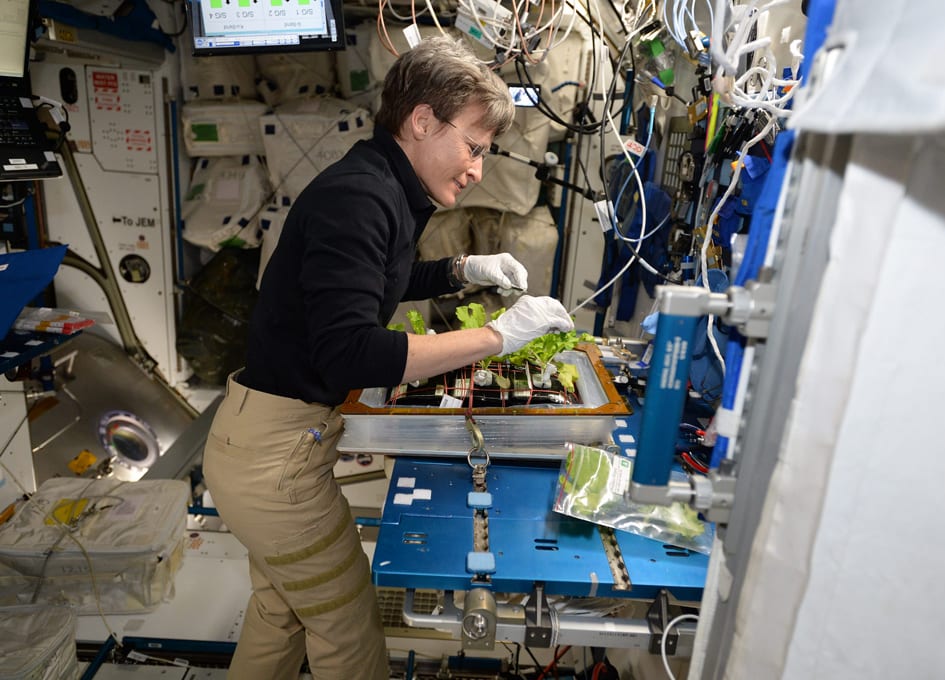 Currently, food on the ISS has an 18-month to three-year shelf life but, when planning food for a future manned mission to Mars, shelf life will become a major issue.

It could be up to five years before the last rations of a crewed mission to Mars are eaten, so current studies are looking at food formulas, better packaging and the ability to grow food in space.

In 2015, the first vegetables were grown on the ISS. This will be crucial for a successful manned mission to Mars, not only for nutrient consumption but also for creating oxygen and processing waste gases.

In a separate project, NASA is researching a system that could use elemental components, like nutrients, to make food, almost like a 3D food printer. This would save hugely on mass and weight.

In 2017, Budweiser announced its goal of becoming the first beer on Mars. The company has already taken steps to accomplish this goal by sending experiments to the ISS to investigate how microgravity affects barley seedlings. This research could help Budweiser develop new malt barley varieties that have a greater tolerance to harsh environments.

Imagine, if humans reach Mars by the 2030s, as some predict, you might be living there, enjoying locally-produced beer and a 3D printed ice-cream!

To read more about food in space:

NASA resources: Food, Nutrition and Eating on the ISS 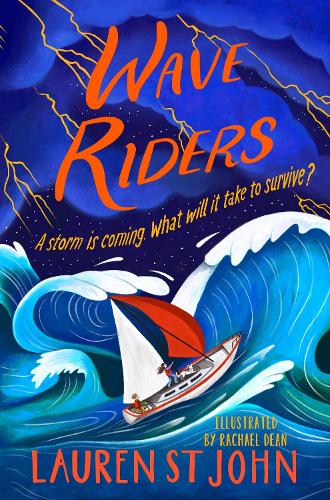